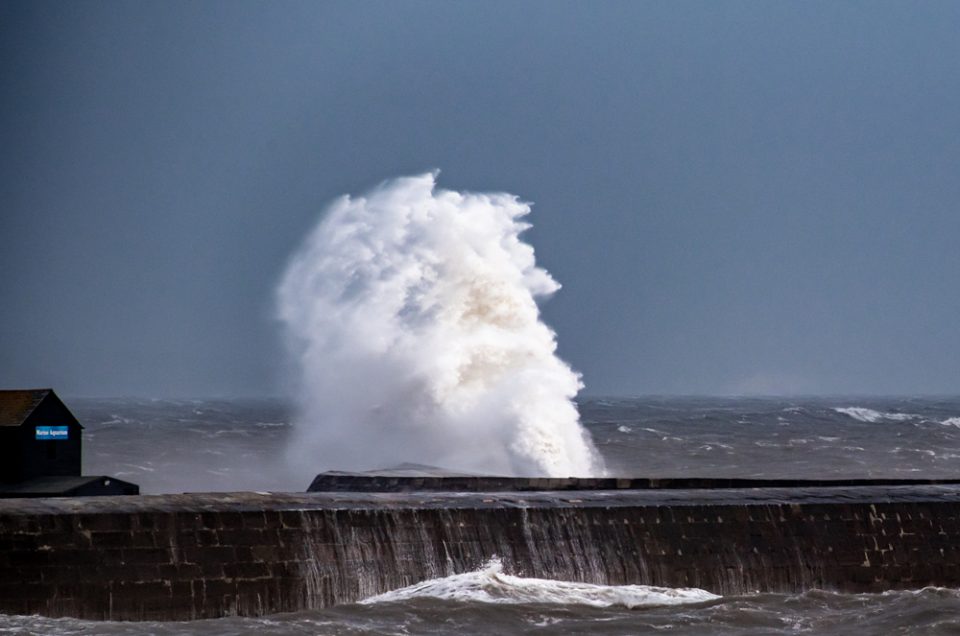 Storm Freya Lyme Regis Cobb Coastal Photography does not get any better than this. High tide in the afternoon. Storm Fraya arriving in the afternoon. On a Sunday. The forecast even put the worst of the rain before the event.

A group of photographers, myself included ventured out to meet storm Fraya at the Cob Quay in Lyme Regis.

Conditions were a little windy to say the least but that’s to be expected during a storm. This was one of those times I was pleased to have my sturdy Manfroto tripod with me.

There was no expectation to use filters or try and capture gentle colourful pictures with the force of storm Fraya driving the sea with such force.

The sea did not stop it’s onslaught with wave after wave smashing against the Cob Quay sending plumes of spray high into the air. As soon as the sea went upwards

With photographers littered down the beach the storm pictures started. One of the biggest problems with this type of photography is capturing an image without getting in the way of others or having others in the way.

After a spell on the beach, I moved about to see if there could be any better locations to shoot Cob Quay being battered by storm Freya.

We were lucky with the weather during the afternoon with the odd cloud break giving sunny moments. The other bonus was the rain held off as forecast. It was an excellent few hours. One can never get bored of watching the sea when it has been whipped into a state by a real storm.

Pleased to have taken a couple of pictures and experienced storm Freya first hand at Lyme Regis Cob.

Thanks for stopping by not check out my Dorset landscape pictures or find out about me as a Dorset Photographer. 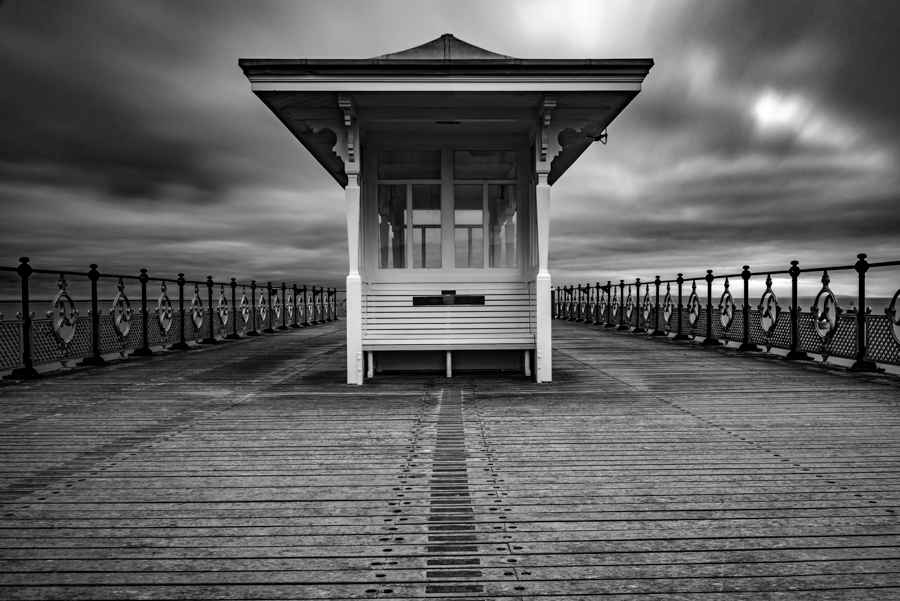 Classic Dorset Print Swanage Pier. I have always steered away from the Dorset prints that we see every day. But when it’s cold and grey and you want to take a picture for a print what better place to go than Swanage Pier in January.

No visitors on Swanage Pier. Whole Pier to my self. Would any be mad enough to stroll down the pier to take pictures on such a cold grey day?

We are so lucky to have such a variety of locations here in Dorset. From the Jurassic coast with cliffs and rock. Piers and Jetties, Three in Swanage alone. Just a small selection the list is endless so no surprise we see these sort of classic Dorset prints regularly.

Thank you for visiting my photography site. Take a moment to check out other classic Dorset prints or find out more about the Dorset photographer 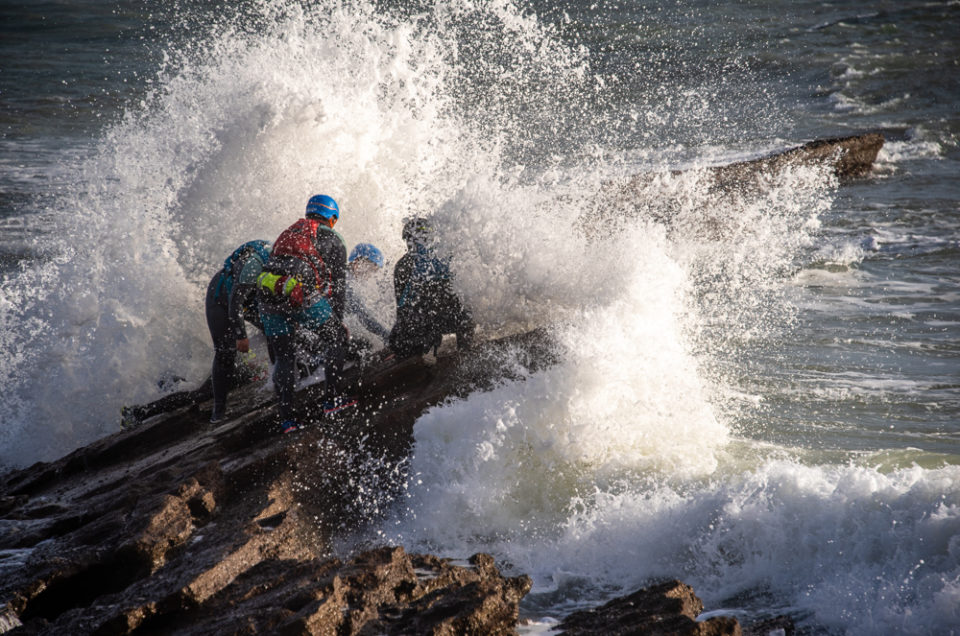 What do you do on a cold windy December day in Swanage? Go take pictures of course. What better place to go than Peveril Point,  Coasteering photography it is.

The intention was to take pictures of the ledges being smashed by the sea. Capturing the waves erupting into spray and some long exposure pictures to give the ledges at Peveril point some magic but a small group of people coasteering changed all that.

Upon arrival, the coasteering group were playing on the North ledge. I took up camp to capture images on the south ledge until invaded.

Quick change of plans the Dorset or Jurassic Coast Pictures were out of the window and it would be more of an event photography than seascape situation. 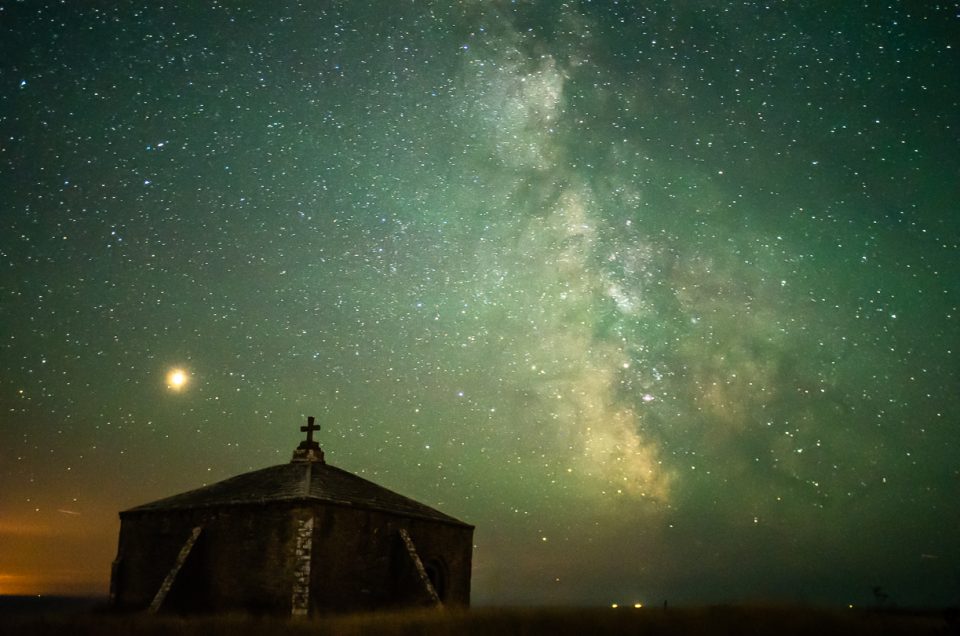 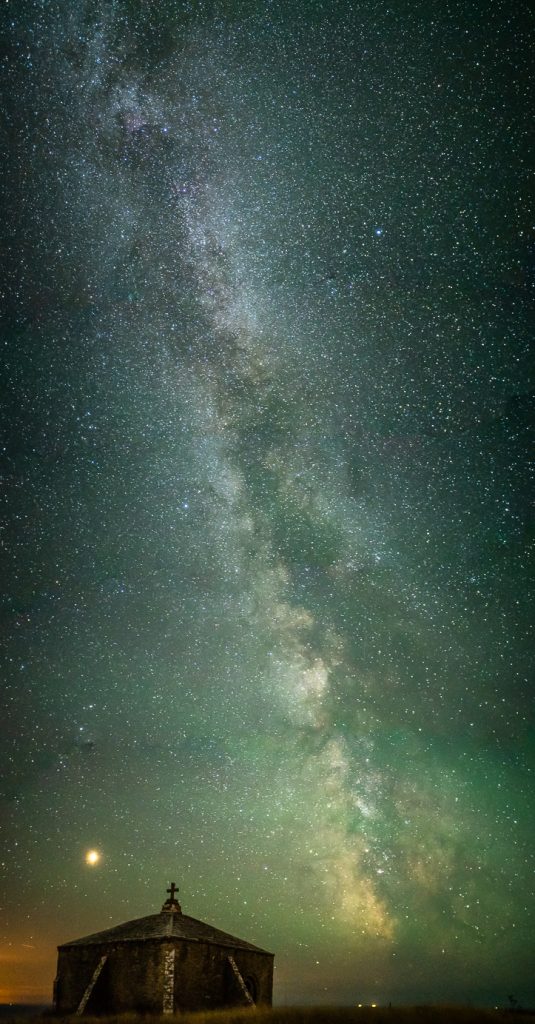 This image is 5 landscape orientated images stitched together.

August evening saw a trip out to St Aldhelms head to capture the chapel with the intention of a quick walk along the coastal path to capture the Milky Way again from the cove of Chapmans Pool and possibly another location.

After this little capture I started the walk ‘Oh the Steps’ I forgot about the steps.

Bumping into 3 other local photographers at the descent to Chapmans Pool who were capturing the Milky Way. I decided not to wander down through their shot with my light so moved elsewhere.

For other Milkyway shots check out the Night photograph gallery

What is St Aldhelm’s Chapel?

In my view its a fantastic location for astrophotography but it is a Norman chapel on St Aldhelm’s Head in the parish of Worth Matravers, Swanage, Dorset. This monument is a Grade I listed building that is worth a visit by day or night.

The small square stone chapel is situated within a small circular earthwork, which some suspect may be the remains of a pre-Conquest Christian enclosure. 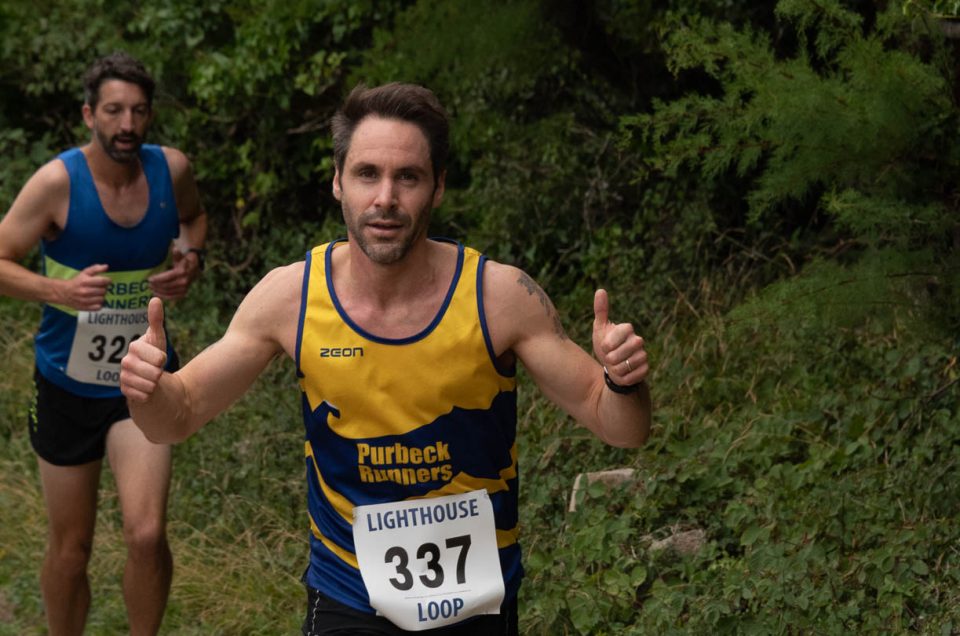 The Swanage Lifeboat week Lighthouse loop run event is just the start of the final day of the lifeboat week.

I had chosen to stand at one of the marshalling points in Durlston Country park on the coastal path. At this point, the runners were just a little over the halfway mark and at the top of a slight hill. The distance from the start line would provide a wider spread of runners to allow a more individual approach to the photographs. The leaders were making light of the course and it was not long after the start that they appeared at my location.

Great to see so many of the Purbeck Runners taking part in the Swanage Lifeboat Week Lighthouse Loop Event.

Catching an event like this is just the start. Having to go through 100’s of pictures to sift out the good ones takes a little while. Jump over to the gallery of images from Swanage Lifeboat week Lighthouse Loop Run Event the and check them out.

If you took part then I hope I have a shot of you. Please feel free to share or let people that may be in the pictures know. I am sure they would love to see the fun.

Please feel free to contact me should anyone require prints or further information.

The Wheel Barrow Race is possibly the second peak to the week of fun. Entrants in fancy dress with wheelbarrows that have to run around the town and have a drink. What could possibly happen?

The event was ready and all the entrants in fancy dress all I needed to do was to arrive and press a button. With the Carnival Wheel Barrow Race going around the town there are several locations to try and capture all the entrants to the wheelbarrow race. Shooting from the triangle near the Swan Pub I was able to snap away as the wheelbarrows came up Institute road. When passed a quick move over the road and catch them again stopping for a drink at the Swan. Short walk to the seafront and catch them racing for the finish line.

Catching an event like this is just the start. Having to go through 100’s of pictures to sift out the good ones takes a little while so jump over to the gallery of images from the Swanage Carnival Wheelbarrow Race and check them out.

If you took part then I hope I have a shot of you. Please share. Tag people that may be in the pictures. I am sure they would love to see the fun.

Please feel free to contact me should anyone require prints or further information. 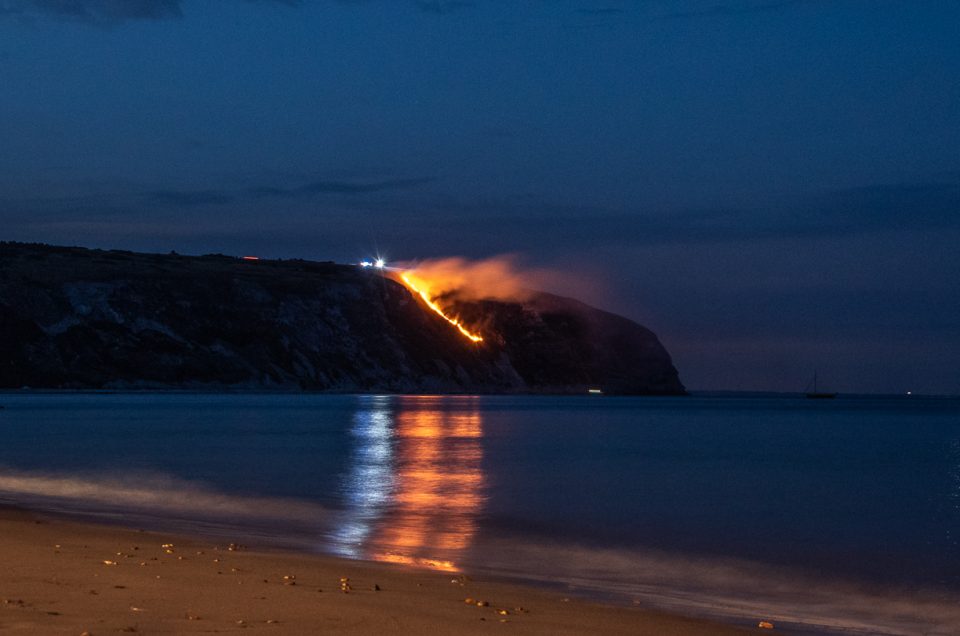 Ballard Down Fire. Emergency Services were called with the outbreak of fire on Ballard Down, Swanage Bay.  The fire service has had many heathland fires in the area to deal with in recent weeks with the ‘heatwave’ that the UK is experiencing. This is probably the most awkward for them being a cliff face.

This incident was a multi agency situation. The Fire service being supported by both the local Swanage Inshore lifeboat and coastguard. 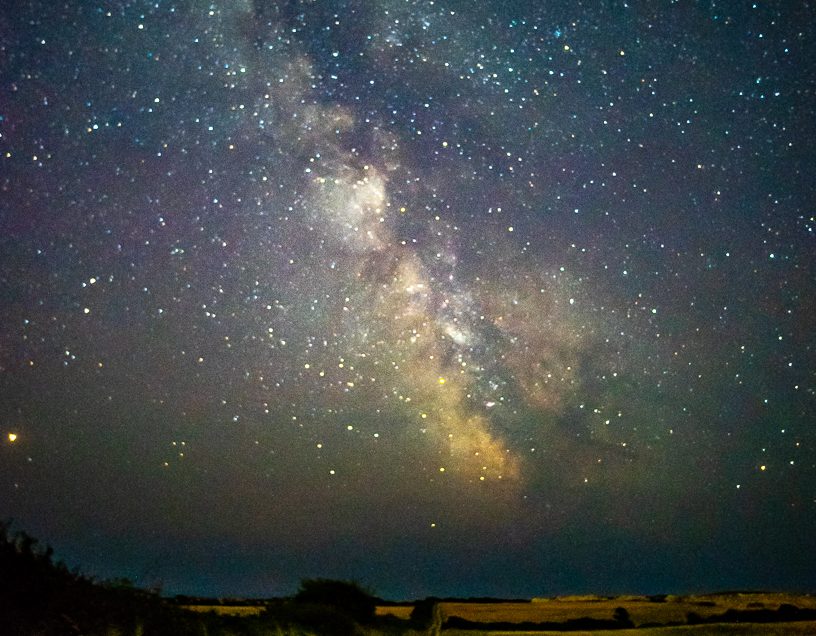 “Road to Milky Way” captured on a farm track that doubles as a route to the coastal path in Durlston Country Park. This beautiful Country Park near Swanage is just a small part of the Jurassic Coast.  Walking the dog here in the evenings I have often seen the converging lines of the path that the farm vehicles have cut. Just had to wait till the Milky Way had moved far enough around. Clear skies and a warm night so a capture of the Milky Way was in order.

All alone. Well apart from the odd deer and fox. In  the middle of nowhere the light pollution drops. The the stars really begin to shine brightly making the night sky magical.

Taken with Nikon D750 Camera and a 20mm lens mounted on a Manfrotto Tripod f3.5 for 22 seconds.

Don’t forget the guide. If you want to try and take shots like this and think that its not possible then check out my beginners guide to Milky Way Photograpy  The simple instructions in this will help you start out capturing fantastic shots of the Milky Way and who knows may get you hooked on taking Astro Pictures.

Full size photograph can be viewed in the “Night Photography” Gallery and prints of this Milky Way Picture are available. 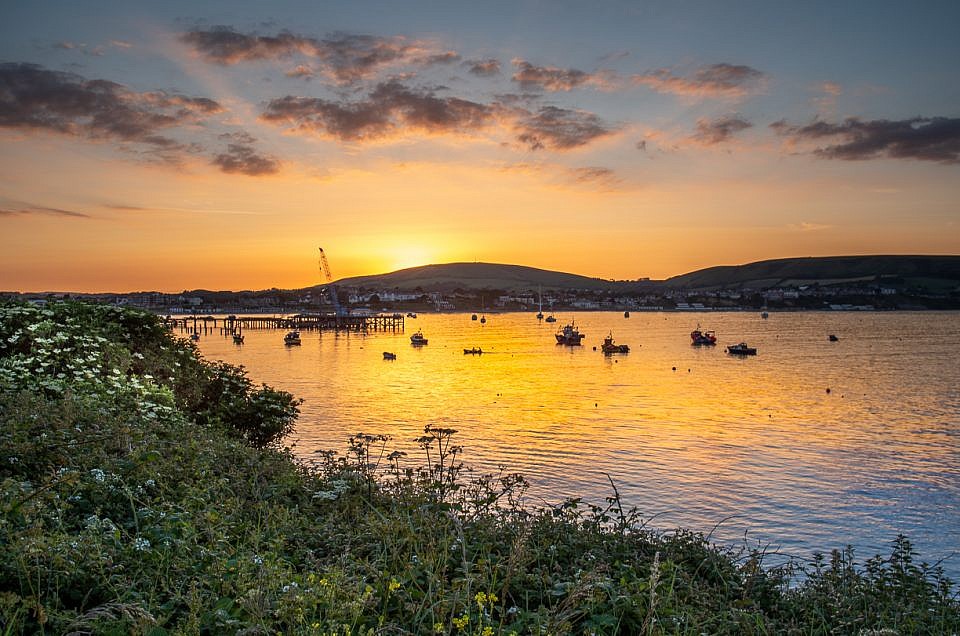 Swanage Bay sunset glow. Down at Swanage lifeboat station for training and boom. The most beautiful sunsets can happen and in that moment of natures perfection you capture a shot. This is one of those pictures. I don’t think this is an award winner but to me it just captures the beauty of the sunsets here in Swanage.

The moments leading to this had strong harsh light. Moments after the sea returned to the aqua blue. This was the time for the shot with the sunset bathing the sea with its warm golden glow.

When I set off to lifeboat training at Swanage lifeboat station I had not expected to see such great colours. Always pays to have your camera with you.

Looking for other pictures by Dorset Photographer Roydon then check out the gallery. 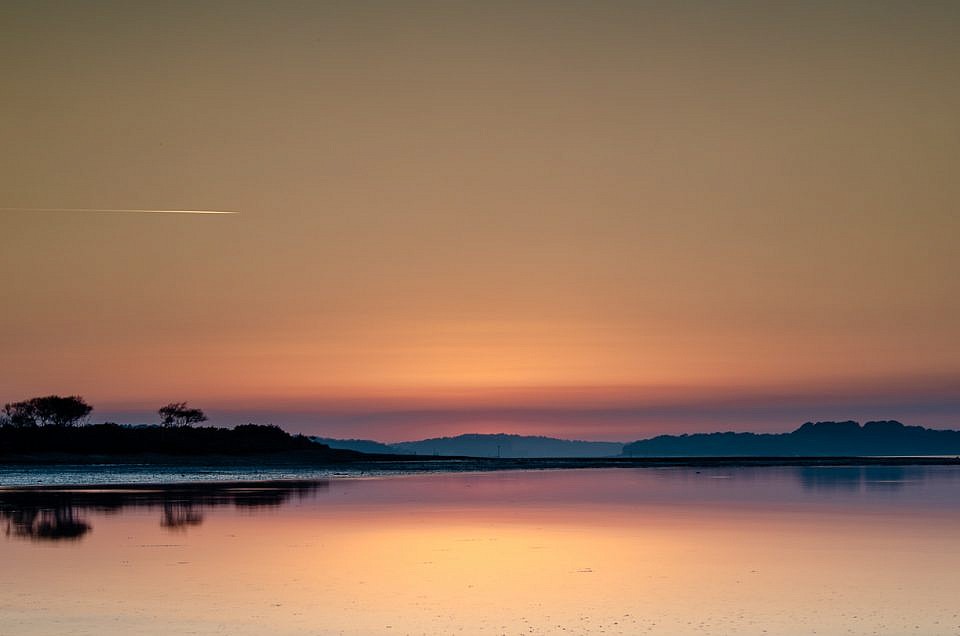 Tranquil Sunset Poole harbour. After a very long day a trip down to Poole harbour, well Bramble bush bay in Poole to round it off with a sunset picture. The reward was a glorious sunset over the still waters. The colours did not stop developing in the sky for what seemed like an eternity. The water reflection just completed the image.

Sometimes when you have a plane go through a shot it can ruin the image but in this case I feel that it complements the whole scene just adding to the totally Tranquil atmosphere of the picture.

For another picture captured in the same area check out this post: Tree Sunset Poole.

This website uses cookies to improve your experience while you navigate through the website. Out of these cookies, the cookies that are categorized as necessary are stored on your browser as they are essential for the working of basic functionalities of the website. We also use third-party cookies that help us analyze and understand how you use this website. These cookies will be stored in your browser only with your consent. You also have the option to opt-out of these cookies. But opting out of some of these cookies may have an effect on your browsing experience.
Necessary Always Enabled
Necessary cookies are absolutely essential for the website to function properly. This category only includes cookies that ensures basic functionalities and security features of the website. These cookies do not store any personal information.
Non-necessary
Any cookies that may not be particularly necessary for the website to function and is used specifically to collect user personal data via analytics, ads, other embedded contents are termed as non-necessary cookies. It is mandatory to procure user consent prior to running these cookies on your website.
SAVE & ACCEPT